The 53A-353 Relay Switching Card provides twenty-four independently controllable single-pole, single-throw relays. The relays can be switched at up to 100 times per second while providing a minimum dwell time of four milliseconds. Fully random relay control (open or close) is provided by means of ASCII characters transmitted from the system controller.

BITE
Built-In-Test Equipment (“BITE”) is provided by a readback feature which allows the user to interrogate individual channels under software control to determine closure status. In addition, a row of LED indicators along the front edge of the Card shows which relays are open and which are closed.

Dwell:
Dwell time at maximum switching rate is 4 msec minimum. Other dwell times must be set in software. 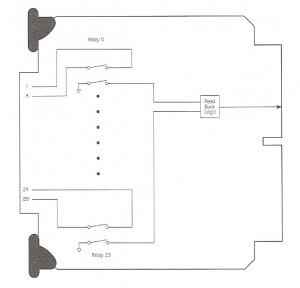