• Provides 10 independently controlled DPST or SPDT relays
• Individual relays may be randomly opened or closed, or all relays on the card may be opened or closed as a group

The 53A-355 Relay Switching Card provides 10 independently controlled relays which can sustain up to one hundred switchings per second while providing a minimum dwell time of four milliseconds. Individual relays may be randomly opened or closed by transmitting ASCII characters from the system controller. In addition, all relays on the Card may be opened or closed as a group. The maximum switching rate may be set at 100 operations per second or at 20 operations per second for improved relay life in high current switching applications.

Four wires of each relay are available at the front edge connector. The remaining two wires of each relay are terminated on the printed circuit card at N.T. (Normally Through) pads which are available to the user. The N.T. pads can be used to terminate a circuit with a load resistor or by placing a wire jumper across a pair of N.T. pads, the relay outputs at the front edge connector can be converted from double-pole, single-throw to single-pole, double-throw.

BITE
Ten LEDs provide Built-In-Test Equipment (“BITE”). An individual LED will be lit when its corresponding relay is closed.

Specifications
Configuration:
10 each DPDT relays brought out to front-edge connector as DPST (N.T. strapping provided on PC. board.) 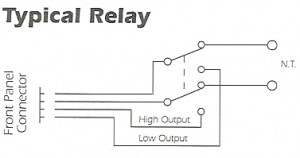 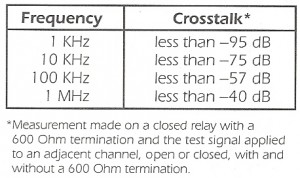