The 53A-334 Reed Relay Scanner Card provides 32 one-wire channels of analog signal acquisition or distribution at a switching rate of up to 350 channels per second. A channel can be randomly selected (closed) by transmitting ASCII characters from the system controller to the CDSbus chassis.

Up to ten 53A-334 cards can be plugged into one CDSbus™ chassis to scan up to 320 channels. As many as ten card cages can be chained together to provide a system with up to 3,200 one-wire channels.

The Card includes a readback feature that provides a two digit indication for the closed channel. The readback feature uses an additional pole on each relay to insure complete accuracy. In the event of multiple closures an error code is generated.

The output of each Scanner Card is routed to the front edge connector and to the analog backplane of the chassis. The backplane analog bus allows the Scanner Card to route signals to other devices (such as the 53A-522 DMM) without additional external interconnect wiring.

Reed Life:
At least 10^7 operations per channel at rated load of 10 Watts.

Scanning Rate:
Random channels selected at up to 350 channels per second. 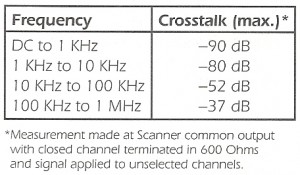