The 53A-333 Reed Relay Scanner card provides 15 three-wire channels of analog signal acquisition or distribution at a switching rate of up to 150 channels per second. Any single channel may be closed at random by sending ASCII characters from the system controller.

A single CDSbus™ chassis can hold up to ten Cards (up to 150 scan channels), and a complete 53A System can control up to 100 Cards (up to 1,500 Scan channels). Each Reed relay scanner Card may be operated independently or logically connected with any other scanner card in the system.

The Card includes a readback feature using a third relay pole to insure complete accuracy, that provides a two digit indication for the closed channel. In the event of multiple closures an error code is generated.

The output of each Card is routed to the front edge connector and to the analog backplane of the chassis. The internal analog backplane is used to route signals to other CDS instrumentation without the need for external wiring.

BITE
Fifteen LEDs provide Built-In-Test Equipment (“BITE”) for the 53A-333 Card. A lit LED indicates that the associated channel is closed. In addition the readback feature can be used to provide diagnostic information to the system controller. 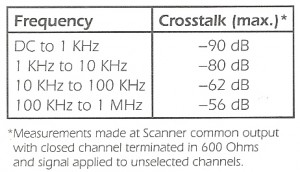