The MIL-STD-1553A/B Bus Simulator Card allows the system controller in an ATE System to test and simulate avionics devices via the MIL-STD-1553 data bus now being used in many military aircraft and communications systems. The Card functions either as a bus controller simulator, as a bus monitor, or as a single- or multi-remote terminal simulator with the capability of inducing and detecting various types of errors.

BUS CONTROLLER SIMULATOR
The user preloads the 53A-453 Card memory with the command and data words to be sent to each of up to 31 terminals plus broadcast mode. Individual terminal responses received by the 53A-453 Card are then stored in on-card memory by terminal number for later examination and analysis.

REMOTE TERMINAL SIMULATOR
The Card can simultaneously simulate up to 31 remote terminals. Response, data, and status words for each simulated remote terminal are preloaded in 53A-453 on-card memory. The preloaded messages are automatically transmitted when requested by the bus controller. All received data from the bus controller are stored in on-card memory for later evaluation.

BUS MONITOR
All 1553 bus traffic is observed and stored. The user can control the point at which monitoring and storing of up to 30,000 1553 words is initiated and terminated.

BITE
Seven LEDs provide Built-In-Test Equipment (“BITE”) for the 53A-453 Card. One LED indicates that 1553 communication is occurring, three LEDs indicate the mode of operation, and two additional LEDs indicate sync and error status. A programmable self-test capability is included that can be invoked at any time.

Message Format:
Programmable command or status word plus a user-definable number of data words that can easily exceed  the 32-word maximum of MJL-STD-1553.

Message Capability:
Any number of messages may be specified up to available buffer size.

Message Synchronization:
The start of remote terminal operation or data collection may be synchronized to a user-specified pattern word received from the 1553 bus controller.

Format Checking:
Internal firmware checks for the following:
Mode Code Commands presence or absence of a data word and direction of data usage of broad-cast command illegal mode code in RT to RT transfer.
Broadcast Commands, absence of a response (normal and RT to RT transfer)
RT to RT Transfer, response by both RTs, consistent RT numbers, proper use of T/R bit, word count of both RTs consistent with actual word count, RT to RT broadcast checked for no response by a receive RT, illegal use of mode codes.
Other Format Checks, reserved bits no set, instrumentation bit not set in status word, no data words following a status word with busy bit set (even if requested), message error bit set broadcast received and dynamic controller acceptance bits set only in response to transmit status mode command.

Blocked binary readback mode only appends CR/LF after all data in a buffer has been read.
In IEEE-488 DMA transfers, this also applies to the EOI line.

Programmed By:
ASCII Characters. Data may be programmed directly in Binary. 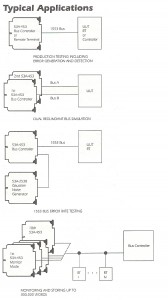