The sixteen inputs of the Digital Input/Analog Comparator Card can be configured under program control to function as either sixteen digital inputs or as sixteen analog comparator inputs. In either mode, each channel’s logic or threshold level is independently programmable.

Analog Comparator Mode
Each input’s voltage level is continuously monitored and it is determined if it is greater than, or less than, a threshold level programmed by the user.  When a threshold crossing is detected, a “vectored priority interrupt” is sent to the system controller. In addition, a pollable latch is set. The system controller can request the status of an individual latch or of all latches as a group.

Digital Input Mode
The logic sense (high or low true) and logic threshold level of each input channel are independently programmable. Data may be captured either upon request or when an external strobe is received. TTL outputs are provided that converts any logic level up to 200V to TTL levels. In addition, provisions are made on the card so that open collector and contract closure inputs may be monitored. 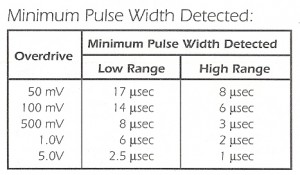 Data Throughput:
The rate at which data can be input continuously by the system controller is 8000 characters per second.